On Thursday, May 9, the Academy of Science released the results from the 2019 St. Louis Science Fair. Once again, MICDS had a strong showing with students in multiple grades bringing home ribbons and prizes. Sixth to eighth grade students interested in competing are encouraged to join the Science Fair club, an activity that meets from February through April, giving students time and space to work and collaborate on their projects. Some students work alone, while others form groups of up to three, on a topic and project of their choice. Most students also do additional work outside of the club to meet deadlines and carry out experiments.

Abhinav Katyal ’25 – Long-term memory: boys vs. girls (Abhinav also won a Broadcom Masters Award, reserved for top 10% of middle school winners in the nation. Learn more about his project below.)

Nina Willis ’25 – Understanding the absorption of water (with food!)

Jason Song ’25 – How much does the temperature of magnets affect its magnetic field?

Daniel Chen ’25 – Parachutes: Does the size of a parachute affect its rate of fall?

Nina Bhayani ’25 – Sunscreen: protecting your skin one dab at a time

Aakarsh Rai ’20 was a finalist in the 2019 Honors Division for his project The effect of a Cantu Syndrome associated mutation on ATP-Sensitive (K-ATP Channel Activity). Aakarsh won a $1000 scholarship. 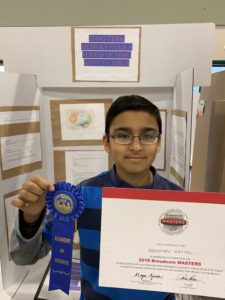 We caught up with Abhinav Katyal ’25 to learn more about his science fair project. Last year, Abhinav studied short-term memory of boys versus girls, and this year he wanted to extend his research into long-term memory. After doing research, he hypothesized that girls would be better at long-term memory than boys.

His study involved printing out sheets of paper that had ten different random objects, like cars and houses. He distributed the papers to ten boys and ten girls and gave them two minutes to memorize the objects. After two, five and 12 days, Abhinav asked each test subject to recount what they remembered from the original papers. He discovered that his hypothesis was correct: girls have better long-term memory than boys. “It didn’t surprise me,” he said. “I predicted girls would have better memory because they have stronger bridges between the parts of their brain. Those bridges are 25% bigger so they can recall better. They tend to be better at remembering and recognizing faces, while boys are better at remembering abstract and 3D objects such as buildings.” To conduct his research, he found reliable websites and used his parents, both of whom are doctors, as resources. His research took over a month to complete, as sometimes his test subjects weren’t available for re-testing on his specified days and he would have to start over with a new subject.

He was thankful for the Science Fair Club that helps with organization and registration and offers teacher guidance. “The teachers will look it over,” he said, “But the effort has to come from the student himself.” He was a little surprised that he won a blue ribbon and the Broadcom MASTERS Award. “My parents told me my project looked good and I agreed with them, but I didn’t expect I would get an award.”

“I would recommend participating in it to all kids because you get the chance to learn more about a topic you’re exploring and you can also get ideas from other kids at the science fair. It was a good experience,” said Abhinav.

Congratulations to all of our Science Fair winners!

2nd Graders Encourage You to Eat Fruits and Vegetables